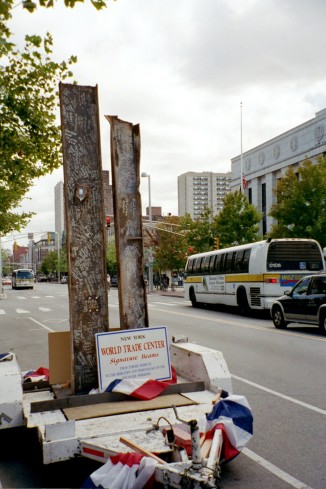 I mentioned 9/11 in yesterday’s post, so let’s continue with that. My wife and I were living in Cambridge, Massachusetts at the time. Her boss at MIT was supposed to be on one of the planes that hit the World Trade Center (He had a change of plans, so missed the flight.) Just a couple weeks before the attack, we had gone to New York and seen the towers. I’d been there many times. It was my wife’s first and last time seeing them.

I was at home that morning, when she called to tell me a plane had run into the World Trade Center, and I should check out the news. I flipped on the TV just in time to see the second plane hit. That made it clear we were not dealing with a freak accident. I’m not a big TV watcher, but I was riveted by events as they unfolded. When an on the spot reporter at the Pentagon broke off suddenly, yelling something about being under attack, I called my wife back to fill her in on the latest. She came home, and we both just sat in front of the TV, stunned.

Early that afternoon, I went to my volunteer job at CCTV, the local cable access station. The mood was apprehensive. It still wasn’t entirely clear what had happened, or why, or what it might lead to. After my shift in the computer lab, I met up with my wife again and we had dinner at one of our favorite restaurants, a relaxing Tibetan place called Rangzen.

After supper, our neighbor Carl, from down the street gathered a few of us together for a quiet vigil. We sang a few songs, including “With a Little Help From My Friends,” then slowly drifted apart to head either back to our respective homes, or to go join other gatherings taking place across the city.

The wave of patriotism initially felt good. I was proud to live in the United States, happy to live in the land of the free, the home of the brave. But then the phrase “war on terror” started being batted around. That didn’t bode well. It was not only too militant; it was far too vague. I wanted revenge on whoever had done this too us too, but I didn’t want WWIII. I also didn’t want to fight an undefined enemy that could mean a hostile country, a terrorist cell within the US, a foreign visitor, suspicious citizen, or anyone the forces in charge found inconvenient.

Now a similarly nebulous war is being fought, but without provocation. This time the enemy is COVID-19. Or immigrants. Or anyone Donald Trump wants to finger for whatever personal vendetta he’s currently nursing. The tagline this time is Make America Great Again, which means even less than “War on Terror.” It behooves us to remember history, to guard the present, and to plan wisely for the future. A catchy slogan can hide a dangerous agenda.

One thought on “9/11 and Other Catchphrases”